The ability to transform digital information into perfect physical motion is key for empowering intelligent motion. Regardless of your application, all subsystems need to communicate with each other and their environment to maximize efficiency and reduce downtime to a minimum. By covering a wide range of industry-standard protocols and interfaces, including TMCL™, Trinamic products form the perfect solution to your motion control needs.

The paradigm is shifting towards communication between devices. This so-called machine-to-machine communication (M2M) is not only used on the factory floor, it's also gaining popularity in lab automation, office automation, robotics, and even household devices. And while different real-time requirements demand different approaches, it's important they can communicate with each other.

CANopen is a communication protocol and device profile specification designed originally for embedded networking applications. Based on the CAN (Controller Area Network) protocol, CANopen offloads the system from CAN hardware-specific details, such as bit-timing and acceptance filtering. The standardized protocol for time-critical processes and configuration, allows for communication between devices from all manufacturers offering CANopen products. Trinamic products are designed to fulfill the CANopen DS402 and DS301 standards while supporting unique features like StallGuard or CoolStep. 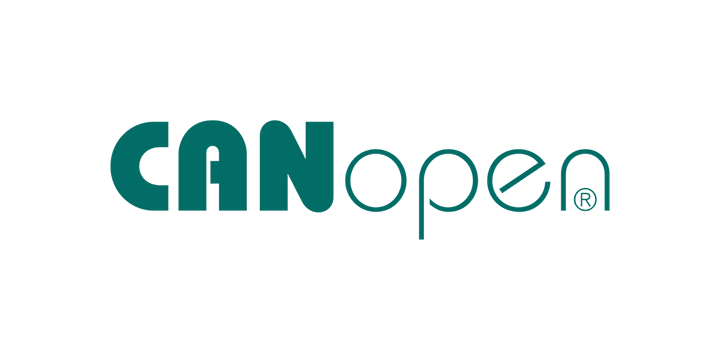 CANopen over Ethercat, or CoE, is a protocol that supports all CANopen products to be used over EtherCAT. Making direct use of the service data objects protocol, existing CANopen stacks can be used while they stay practically the same. By using EtherCAT instead of CAN bus for transmitting and receiving data, it merges the advantages of the widely used CANopen protocol with the high-speed field-bus system. As such, CoE enables CANopen for use in applications with real-time requirements, making it ideal for robotics and industrial automation, as well as other devices requiring high reliability, high synchronicity, and high bandwidth. 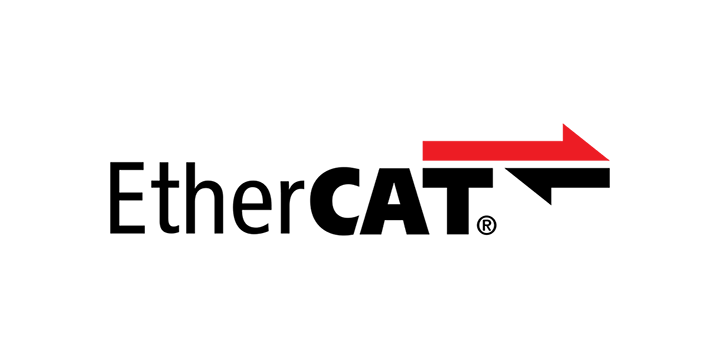 Originally created by Modicon (now Schneider Electric), Modbus is a data communications protocol commonly used for connecting industrial devices over the RS485 interface. While most of Trinamic modules normally use TMCL™ as their RS485 protocols, some modules support the Modbus protocol with special firmware. These do not fulfill real-time requirements. While this makes RS485 less suitable for applications with real-time requirements, such as cobots and highly synchronized multi-axis applications, it’s simplicity makes it the preferred bus system for devices with independent motor axis or for cost-sensitive applications. 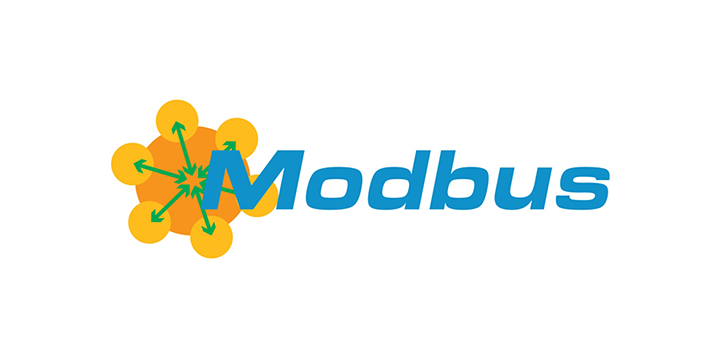 Trinamic Motion Control Language is a versatile protocol that can be used with a CAN, RS232, RS485, or USB interface. While it's mainly developed for evaluation kits and programming stand-alone TMCL applications, it's widely used by Trinamic's customers who like the intuitive and free to use graphical user interface that comes with it. This GUI - TMCL-IDE - is a flexible integrated development environment supporting the use of commands in direct mode, monitors real-time behavior visualized in graphs, and logs and stores data. All settings can quickly be exported for use in your own firmware project. 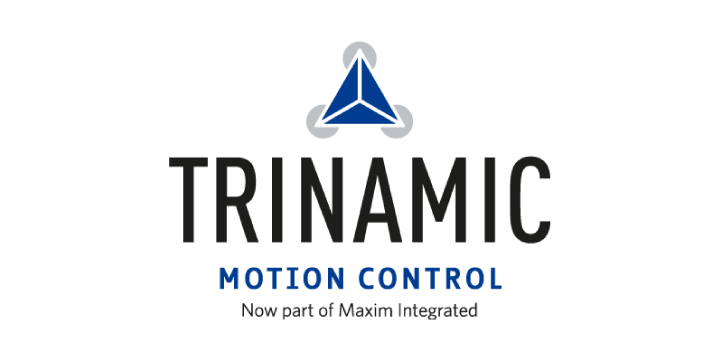 Protocols won't do any good if the system doesn't have an interface to transfer the information. Ranging from position information from encoders or other sensors to high-level commands, it's important to pick the right interface. Varying from EtherCAT for real-time requirements to the simple, 2-wire RS485 interface, they form the infrastructure needed to empower intelligent motion.

CAN (Controller Area Network) is a highly flexible protocol that operates as a multi-master system to send data with a maximum signal rate of 1 megabit per second. Originally designed for the automotive industry, CAN is used in many other industries and applications in transportation, industrial machine control systems, lab and office automation, and other embedded applications. A CAN network operates by sending lots of small messages to every node in the network. As such, every node in the system gets a consistent flow of data. Because the information is broadcasted freely without a specific addressee, all devices in a CAN network can read and write frames of 10 bytes of data that other devices act upon. Due to the robust CAN bus standard, it's perfect for communication between microcontrollers and devices without a host computer. 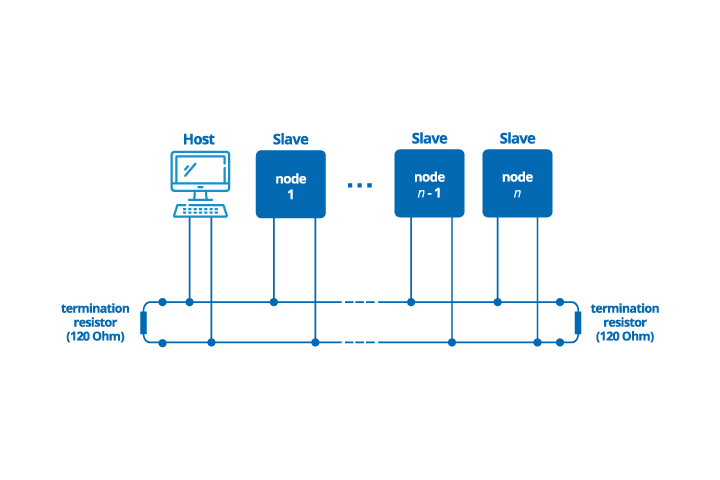 EtherCAT, or Ethernet for Control Automation Technology, is a real-time Ethernet network. The interface allows for devices to communicate with each other using the master/slave principle, where the master sends a command and the slave replies. Data transfer is done completely in hardware via an EtherCAT Slave Controller (ESC), such as the TMC8461 or TMC8462, meaning the slave's software doesn't have to deal with the data transfer at all. The process data is normally being sent cyclically through the bus by the master. In most applications the cycle time is 1ms but some masters and slaves support cycle times down to 250µs. As the bus only uses one master, there is no multi-master capability. By combining commands in datagrams, one message can be sent through the network to command multiple slaves or actuators, ideal for synchronized tasks. 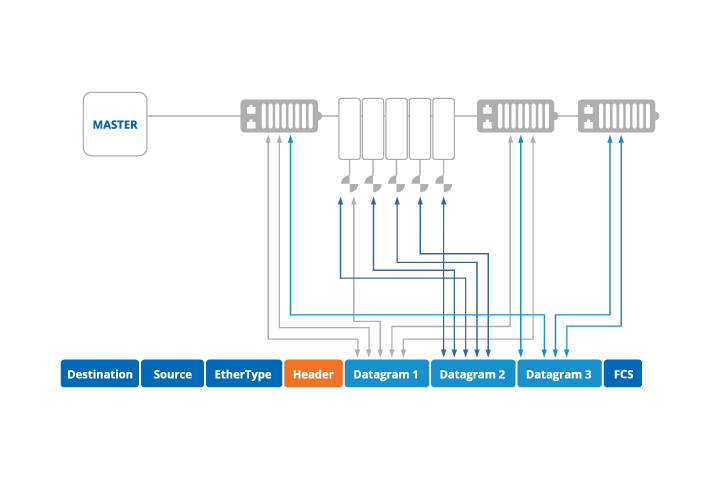 RS232 is one of the first - and most popular - interfaces. Introduced in 1960 for serial communication transmission of data by sending a positive voltage for a binary 0 and a negative for 1, it supports both synchronous and asynchronous communication. RS232 ports can still be found on older computers. However, this is changing rapidly due to quicker alternatives such as RS422, RS485, and Ethernet which also allow for cables between devices of longer than 15 meters. Furthermore, RS232 networks are very limited as there is no multidrop possible. Instead, only one device can receive commands via another device sending the commands. However, RS232 still is widely used in industrial applications, scientific instruments, and other devices where the limited distance and low data rate are sufficient. This is mainly due to its simplicity and low cost. 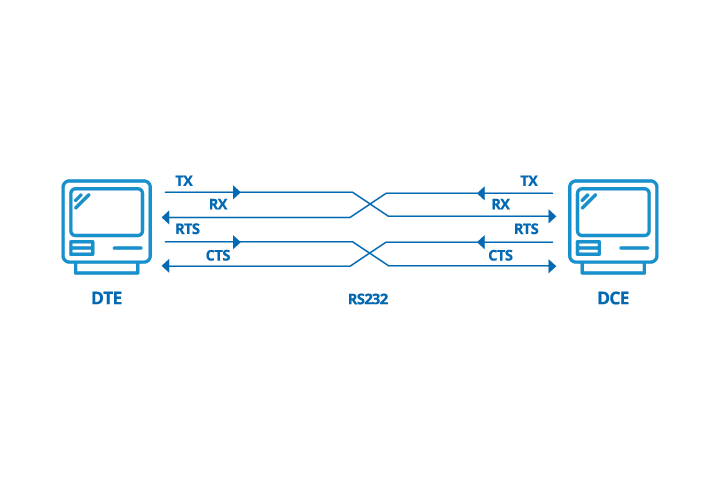 RS485 is a serial interface introduced for higher data rates than RS232. It has a differential receiver and driver with data rates up to 10 Megabits per second at a cable length of up to 15 meters. RS485 even allows for data transfer using cables over 1 kilometer long. This is possible due to the differential receiver and driver, making the serial interface much more resilient to common mode interference than other serial data standards. Another advantage of RS485 is that it supports multiple commanding devices in one single network, capable of commanding up to 32 devices that each get a unique address - also called a multidrop communication link. All connected devices receive a command once sent, but only those with the correct address will respond to it. Furthermore, the RS485 serial interface commonly uses a 2-wire system, making it easy to design.

USB, or the Universal Serial Bus is a popular, versatile interface that can even deliver power to a peripheral. It has become an industry standard that comes in a wide variety of hardware, including the most recent USB-C. The bus interface is used mainly for communication with a PC since it allows for two-way communication using a differential 4-wire interface. This makes it ideal for programming boards using the TMCL-IDE for example. Furthermore, a USB host can control up to 127 devices linked through hubs using a tiered star topology allowing up to five tiers. The biggest advantage, however, is that a USB interface allows for 'hot-swapping' of peripherals. There's no need to restart a system if you connect a peripheral to it via a USB connection, as the system will automatically detect the new peripheral on the go. 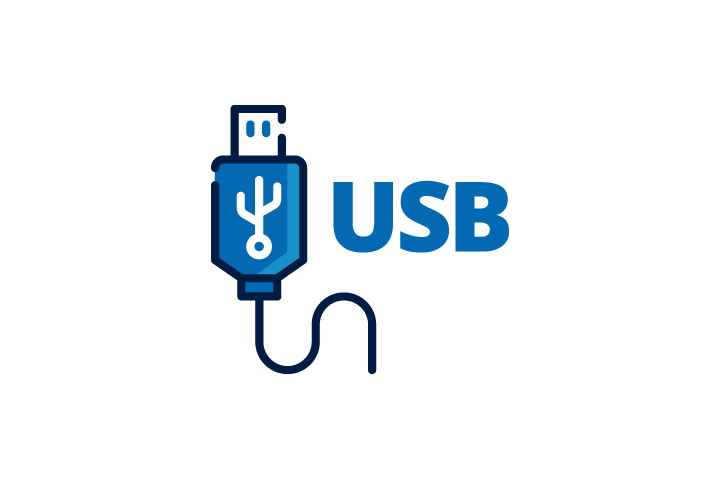 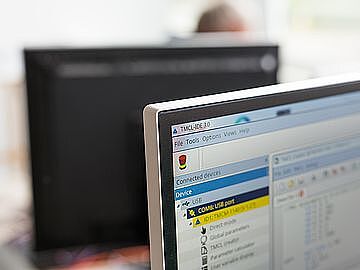 Trinamic's free and easy to use graphical user interface makes it easy to find the right settings and export these for your own firmware project.
Learn More 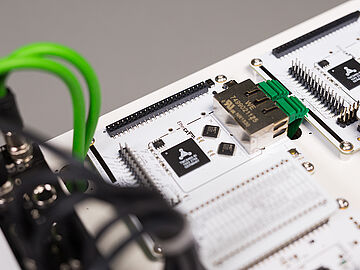 Allowing high freedom in design while reducing the risk of failures, EtherCAT is widely adopted, becoming the open standard in automation.
Learn More 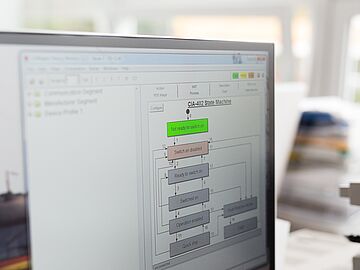 The TMCM-CANopen tool simplifies setup of CANopen modules including access to the CANopen objects and graphical monitoring.
Learn More