What do self-driving cars, advanced 3D printers, and the next generation of “smart” prosthetic limbs have in common? They are all beneficiaries of the emergence of embedded motor driver chips and motion control technologies. These systems, which pair application-specific motion control silicon with open hardware and software platforms, are part of the Fourth Industrial Revolution, a trend that is accelerating the rate of innovation for robotics, industrial automation, and even consumer products that use mechatronic technology.

This new class of devices simplifies the development of mechatronic products by “encapsulating” most basic control functions as hardware logic or verified software building blocks that embedded developers can work with using the same rich toolsets and code libraries they use for conventional applications. In addition to dramatically shortening development cycles, embedded motion controllers make it possible to add new capabilities to existing products, and enable the emergence of many new classes of products.

Figure 1: Even coffee machines now make use of embedded motion control made easy and affordable thanks to Trinamic’s rich toolsets and code libraries, reducing overhead cost. 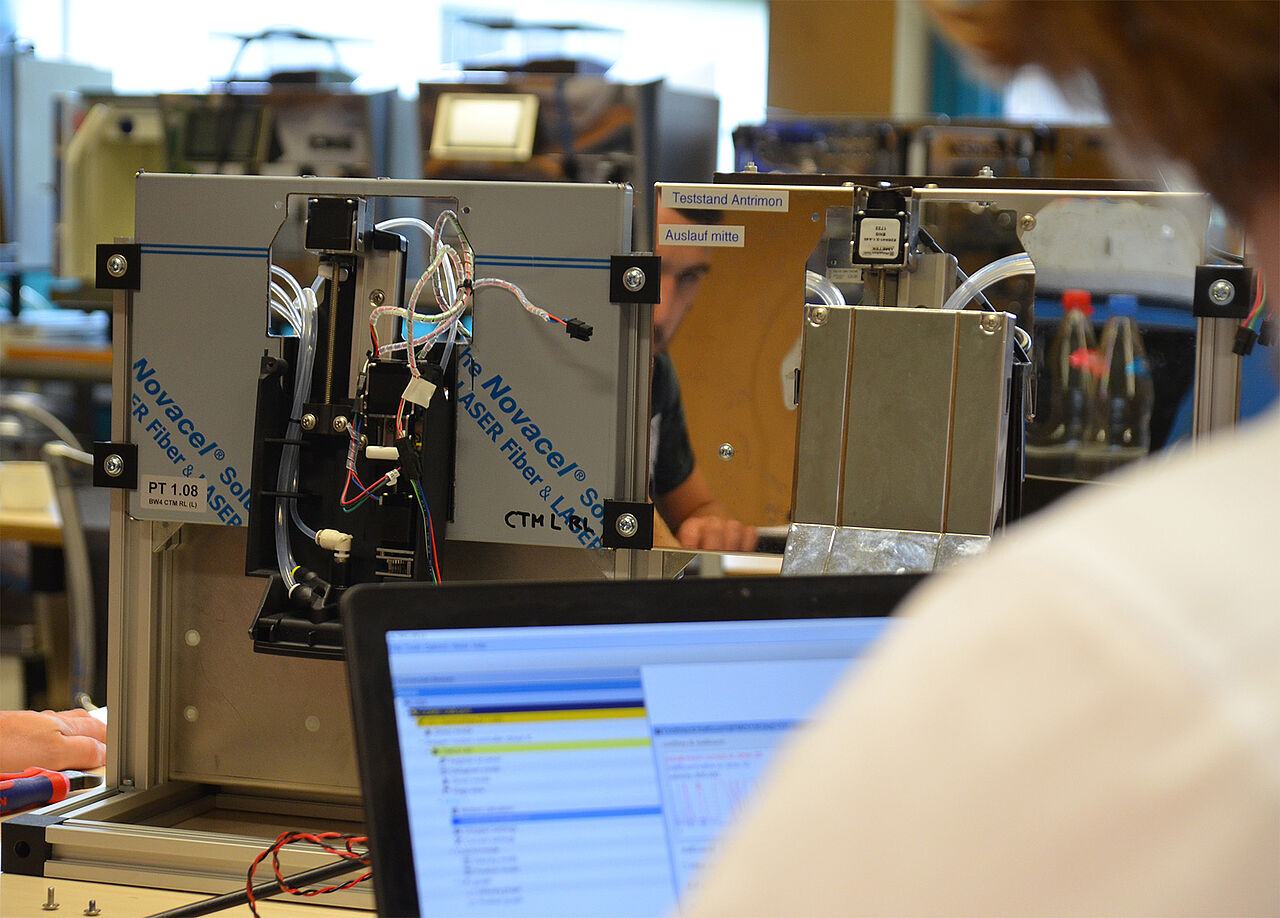 Smart Motors for a Smart World

Embedded motion controllers can turn nearly any motor into a “smart motor,” making it easy and cost-effective for designers to create products that deliver higher performance, efficiency, and, in some cases, entirely new capabilities. Some of these include:

Until recently, these types of capabilities were too complex to implement in many commercial and consumer products. This is changing, however, as motion control benefits from the same “Silicon Revolution” that helped computers evolve from the early mainframes of the 1960s to today’s powerful and affordable PCs.

From Mainframes to Mass Markets

Originally driven by high-end workstations and racks of custom electronics, early motion control systems were bulky and expensive. Those early systems quickly justified their hefty price tags with unique capabilities, such as variable acceleration and load sensing, that brought new levels of precision, flexibility, and productivity to manufacturing and other industrial automation applications.

Over the next decade, increasingly powerful digital signal processors (DSPs) and larger lower-cost field-programmable gate arrays (FPGAs) enabled dramatic cost reductions in the controllers that ran the complex algorithms necessary to model a mechanism’s kinematics, and the motor control signals needed to move it in a precise manner. Nevertheless, the technology’s adoption continued to be limited by the amount of time and specialized knowledge required to create application software. Libraries of reusable DSP and FPGA code for motion control existed but they were usually tightly held by the equipment manufacturers. In addition, most of the code did not follow modern guidelines for reusability so it still took many person-months — even for experienced developers — to implement for each application.

The software barrier has been overcome by embedded motion controllers. These single-chip devices integrate powerful processor cores and dedicated hardware logic specifically designed to accelerate motion control algorithms. Because most embedded developers are not experts in kinematics or motor physics, the devices come with a library of motor control and motion control functions that can be accessed through a standard application programming interface (API). This approach allows designers to give their 3D printer, vacuum-cleaning robot, or biological analyzer advanced capabilities — such as acceleration shaping, microstepping and stepper noise suppression — without having to become experts on motor physics.

More and more motion control functions are being reduced to single-chip solutions, such as Trinamic’s integration of a motion controller and motor driver into a cDriver™.

Embedded motion controllers further streamline development cycles because their development platforms are usually designed to be compatible with many of the software tools commonly used for conventional embedded systems and the large libraries of open-source reference code they support. As a result, developers can build the foundations of their motion control applications from libraries of existing Java, C/C+/C#, and Linux code, and focus most of their efforts on the 5% to 10% of the code that is unique to their design.

Because embedded motion controllers encapsulate their critical functionality in pre-verified silicon and software, this part of the development cycle is reduced from multiple cycles of algorithm development, implementation, and testing to setting a few parameters and exporting the code to your own firmware. As a result, the development workflow for a bioassay pipetting robot or a high-speed portion-controlled food dispenser is not much different than a non-mechatronic embedded application.

From Captain Hook to Iron Man: A Real-World Success Story

Embedded motion control is making it easier and more cost-effective than ever to turn data into motion. In doing so, it is helping make existing products better and make new classes of products possible. Furthermore, development of these products will follow the trends associated with the 4th Industrial Revolution – and push them further – thanks to motor control and motion control made easily accessible; increasing the velocity in which new technological breakthroughs hit the market, the scope breakthroughs, and the impact they have. 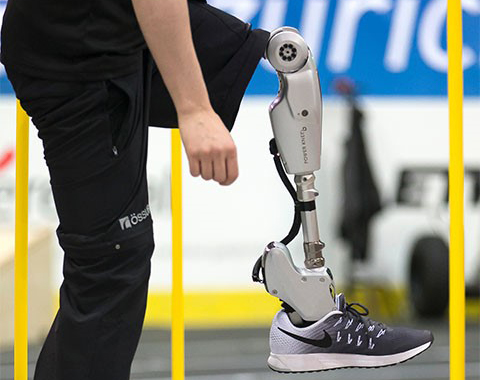 The aim of the project was to create a new type of prosthetic that moves in a lifelike manner and that provides the user comfort, sure-footedness, and locomotive efficiency. Both of the limb’s powered joints rely on embedded motion controllers developed by TRINAMIC Motion Control4 to generate the complex movements and make the most efficient use of the limb’s limited battery capacity.

The controller’s rich set of hardware motion control functions and the development platform’s complement of verified application software eliminated many of the risks associated with the development of controller firmware and shortened the time normally needed for its validation and testing. The control parameters simply had to be adapted to the motor and to the unique requirements of the device’s application. 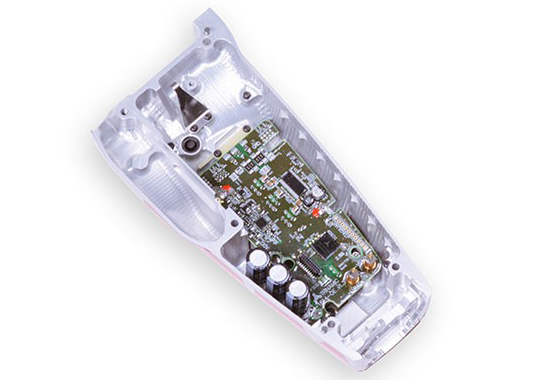 Eliminating many of the steps normally associated with motion control development enabled the design team to create, debug, and verify the functionality of the limb’s custom motor controller system in only five months. This helped keep the ambitious development schedule on track and on time to successfully compete in the 2016 Cybathlon in Zurich (watch the YouTube video in Reference 5 to see the Power Knee in action). While the rapid time to market of the Power Knee will mean greater profits for Össur, the real wealth created by this new technology is the freedom and performance it will provide its users.

1. Additional information on acceleration shaping is available in the white paper, “Reducing timer interrupt load in 3D printer applications,” which can be downloaded at https://www.trinamic.com/solutions/white-papers/reducing-timer-interrupt-load/

2. Additional information on the prosthetic leg, the technology that made it possible, and the Cybathlon competition it competed in are available in the white paper, “The future of prosthetics - Össur Power Knee,” which can be downloaded at https://www.trinamic.com/solutions/success-stories/ossur-power-knee/.

3. The official website for the Cybathlon can be accessed at http://www.cybathlon.ethz.ch/.

5. A video of the Össur Power Knee competing in the 2016 Cybathlon can be viewed at https://youtu.be/DFdSLEnj3ec

ICs are integrated at board-level and perfect for high-volume projects and flexible system architectures.
Learn more

System-on-Modules are integrated at the system-level and designed for small to mid-sized projects and rapid time-to-market.
Learn more

Performance-optimized stepper and BLDC motors can be used as single parts or as ready-to-run PANdrive smart motor solutions.
Learn more