Creating art in a cup with Thermoplan

Creating art in a cup with Thermoplan

You’ve probably heard that coffee is the world’s second-most traded commodity after oil. And while this is not true, the fact that most people believe it shows just how popular a cup of joe is. There’s no escaping of it. Even if you don’t drink it yourself, you’re bound to see it on a daily basis – whether it’s in the streets, at work, or when meeting friends.

Known for developing and producing the coffee machines used by Starbucks since 1999, Swiss company Thermoplan creates automated machines leaving little room for human error when making a coffee. And now, by mixing ingenuity with the latest technology, each cup becomes the perfect brew with the Black&White4 and LatteArtist’s finishing touch. But how do you make the perfect coffee once you’ve selected the beans? And more important, how do you make a machine that creates the perfect cup over and over again? Well, by using smart stepper motor drivers of course! 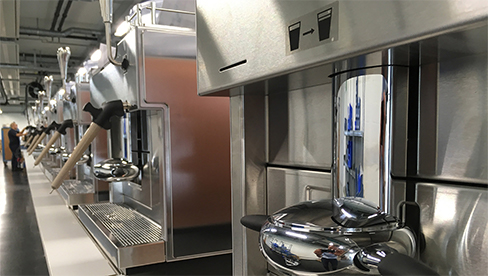 Each coffee bean has its own aromatic flavor. But what’s often overlooked is the impact that grinding the bean has on the flavor. Depending on how fine the grind of the coffee is, hot water will pass through the ground up beans with a certain speed. The finer the coffee grind, the longer it will take for water to pass through – leaving a stronger, more bitter coffee. In contrast, a coarser grind lets the hot water pass through quicker, meaning it extracts less aroma from the coffee itself – resulting in weaker coffee.

The simplest coffee grinders are blade grinders, using spinning blades that more or less chop the beans into smaller parts that are inconsistent in size. When brewing coffee from inconsistently ground beans, it’s difficult to get the best flavor since not all flavors will be extracted from the coarser grounds, while the finer grounds will give the coffee a bitter taste. In short, the flavor is all over the place, hiding the true tones of the coffee beans.

The alternative to blade grinders are burr grinders. Contrary to blade grinders, burr grinders actually grind the beans instead of simply chopping them up in smaller pieces. This type of coffee grinder consists of two pieces – a stationary disc and a rotating disc that grind the beans to a certain size depending on the distance between the two discs. For example, you can set the stationary disc further apart from the rotating disc if you want to make coarse grounds for a French press, or closer to the rotating disc if you want to have fine grounds for an espresso. The quality and consistency of burr grinders have made them the industry’s standard in commercial coffee machines. Ensuring the perfect distance between the two discs at all times requires a precise, repeatable process, for which stepper motors controlled with the TMC5130 are ideally suited.

First of all, while changing the setting of a coffee grinder at home might only take a second, imagine doing it in a Starbucks between all those cups of coffee served up to customers waiting impatiently for their next shot of caffeine from the Mastrena. Automating the process with stepper motors – whether it’s for different types of coffee, after cleaning the machine inside out, or simply because the burrs have shifted after grinding all those beans – means you can serve your customers as soon as possible.

Second, automation turns it into a repeatable process ensuring the optimum flavor for the highest quality from cup to cup. Baristas make it an art to brew the perfect coffee, but for a consistent taste, it is important to have a precise, repeatable process in place. Not only when it comes to grinding the coffee beans, but also when it comes to dosing. State of the art coffee machines such as Thermoplan’s Black&White4 or the Mastrena II are designed to use the exact amount of coffee beans needed, whether it’s for an espresso, latte macchiato, flat white or americano. This brings an added benefit of precise motion control – it not only means the machine delivers the perfect coffee over and over again, it also means optimized consumption of coffee beans. Whether for private or commercial use, using the exact amount of coffee beans needed for a cup means less beans go to waste by grinding too many. 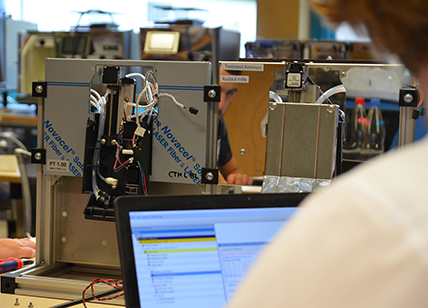 Now, for the aesthetic part, nobody wants to have a coffee machine that simply splashes the coffee in a cup, leaving half of it in the drip tray. Just like the machine itself, a cup of coffee needs to look good, adding to the experience. With smooth and silent operation, the TMC5130 stepper motor drivers ensure this is the case by precise leveling of the outlet for coffee and milk, pouring each drop in the cup without spilling.

With the coffee poured in the cup, Thermoplan has one artistic trick left for their Black&White4: LatteArtist. Latte Art, or the art of making shapes and figures by pouring frothy milk foam in a cup in a certain way, is a passion of many private and professional baristas. Thermoplan are the first to develop a machine with the ability of automatically producing Latte Art on your cappuccino thanks to smart stepper motor drivers in the coffee machine. Attached next to the coffee spout, a small milk spout driven by two Trinamic TMC5130 stepper driver ICs moves silently along two axes – pouring frothy milk foam in the cup along a predefined path, creating a nice figure on top of that much-loved drink. 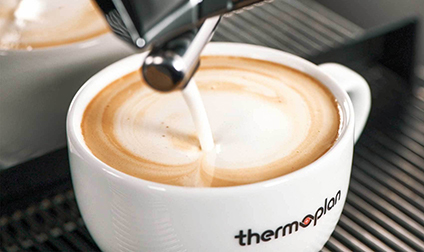 Visit the TMC5130 product site, where you can find the technical specifications and related products such as the TMC5130 Evaluation Kit and Breakout Board.
Learn more

Popular in many markets, Trinamic's technologies offer applications the benefit they need. From microstepping to StealthChop, Trinamic has your back.
Learn more

What is motion control and why do we need it? Why are those tiny chips and modules so important for so many applications?
Learn more