Medical testing, analytical chemistry, and biological experimentation are three critical life science applications that require repeated pipetting on a daily basis. Pipetting is the process of suctioning (or aspirating) a small amount of liquid into a syringe, moving the sample to another receptacle, and then dispensing the sample in precise quantities into the second receptacle.

Scientists, lab, and medical technicians can spend hours every day perform this simple, tedious task—a manual process that is prone to errors. With the advent of low-cost stepper motors, pipetting robots are now cost-effective and compact enough to be found in even the smallest laboratory or medical office. 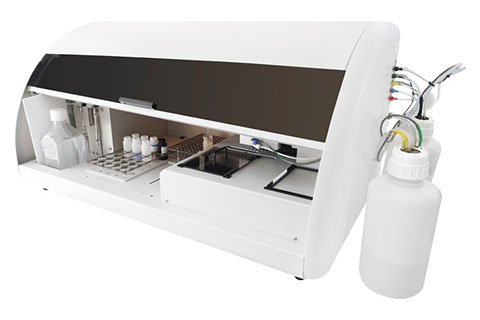 Recently a lab automation developer turned to Trinamic for assistance with the design of their new pipetting robot targeted at small labs, remote field locations, and individual medical offices.

The system was designed for low-cost and minimal footprint while satisfying the same precision requirements of more expensive pipetting robots used in large laboratories.

Working closely with its customer’s engineers, Trinamic developed a custom motion control board that incorporates Trinamic’s triple-axis TMC429 motion controller, a TMC424 feedback resolution encoder, and four TMC262 micro-stepping motor drivers. The compact and easily fabricated board design enables the system to deliver precise, vibration-free, three-dimensional pipette arm motion with an office-friendly noise figure of <50dB. The use of Trinamic’s power-efficient ICs enables the system to operate without a cooling fan, reducing maintenance costs while eliminating a source of sound and vibration. Trinamic further assisted its customer by porting the board design to a mid-volume contract manufacturing partner, reducing time-to-market for the system.

Increase automation efficiency and lab productivity with motion control that mimics the most experienced of human hands.
Learn more

As real objects are involved, motion control requires precision and reliability more than most other disciplines.
Learn more

We know that when it comes to liquid handling, every drop counts. Our expertise allows you to focus on what's important to you.
Learn more