mobile manipulator for research and training

The youBot's intended users, like so many robots these days, are researchers at universities and colleges. Research applications include the development and validation of new mobile manipulation algorithms for the factories of tomorrow, and the education and training of students in general robotics, with a focus on mobile manipulation.

The omnidirectional platform is powered by four KUKA omniWheels, which utilize the Mecanum principle and allow for movement in all directions without mechanical steering via independently controllable servo drives.

The arm can manipulate a load of up to 0.5 kg in any position in three dimensions. To support education and research, the youBot's mechanical structure as well as its drive concept with decentralized servo controllers are like the "larger" KUKA robots. The distributed axis controllers are connected via a real-time bus in the same manner as their production robots.

The standard hand is a gripper with two "fingers", both of which are positioned and actuated independently by a stepper motor. As the communication protocol for the hand is openly documented, users can also develop their own gripper or tools.

All drives (4 platform drives, 5 arm drives, 2 stepper motors) are controlled by a realtime communication bus over EtherCAT, a technology now used in KUKA's industrial robots. The KUKA youBot drive protocol is open source, encouraging users to develop their own applications and control systems. Users have an API (Application Programming Interface) at their disposal that converts the desired movements into control commands for individual motors.

At the center of the youBot is a commercially available Intel Atom PC with a dual-core CPU, 2 GB of ITX-format RAM, a 32 GB SSD, various USB and Ethernet ports, and a wireless network device. The PC runs a real-time Linux kernel for the Simple Open EtherCAT Master (SOEM). Using predefined positions provided over WLAN or Ethernet as input, the PC calculates moment, speed or position instructions for each axis and handles their interpolations individually. The instructions are sent via an EtherCAT bus to the two master boards, which implement an EtherCAT to EBUS gateway. 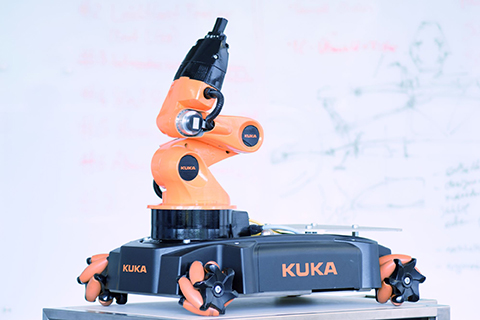 The axis controllers are connected via the EtherCAT backplane bus EBUS. Each of the 9 axis controllers has its own servo controller with field oriented control. In addition to positioning, the axis controllers implement several security features such as an emergency stop function in the event of a connection interrupt. Relevant axis parameter data such as speed, current, position, input instructions as well as data for a various diagnostic and safety functions are fed back and evaluated in real-time.

The gripper board, which controls the "hand", is bound to the last axis controller on the arm via UART and handled as the controller's second axis. In the standard gripper, the jaws are operated by two stepper motors. Gripper load is monitored without sensors using TRINAMIC's patented stallGuard2™ technology.

The charging controller represents the central power management. The power controller features separate charging controls for the two maintenance-free lead-acid batteries (24 V, 5 Ah) when the charger (200 W) is connected. If no charger is connected, the two batteries can supply power for up to 90 minutes. Operation of the robot is possible with both a connected power supply unit and the batteries. In addition, the power controller features individually switchable power supplies for the PC and the motors. Battery current is monitored via the board PC. Users can operate the device with a single button and a two-line display. Therefore, an external control PC is not required.

As real objects are involved, motion control requires precision and reliability more than most other disciplines.
Learn more

Our expertise and years of experience in motor and motion control allow you to focus on what's important to you.
Learn more